The illiterate Cherokee known as Sequoyah watched in awe as white settlers made marks on paper, convinced that these âtalking leavesâ were the source of white power and success. This inspired the consuming ambition of his life: to create a Cherokee written language.

Born around 1770 near present-day Knoxville, Tenn., he was given the name George Gist (or Guess) by his father, an English fur trader, and his mother, a daughter of a prominent Cherokee family. But it was as Sequoyah that around 1809 he started devising a writing system for the spoken Cherokee language.

Ten years later, despite the ridicule of friends who thought him crazed, he completed the script, in which each of the 85 characters represented a distinct sound in the spoken tongue, and combinations of these syllables spelled words. Within a few years, most Cherokees had adopted this syllabary, and Sequoyah became a folk hero as the inventor of the first Native American script in North America.

It may be, as is often noted, that his achievement is the only known instance of an individualâs single-handedly creating an entirely new system of writing.

An archaeologist and explorer of caves has now found what he thinks are the earliest known examples of the Sequoyah syllabary. The characters are cut into the wall of a cave in southeastern Kentucky, a place sacred to the Cherokee as the traditional burial site of a revered chief. The archaeologist, Kenneth B. Tankersley of the University of Cincinnati, said in an interview recently that this was âone of the most fascinating and important finds in my career,â yielding likely insights into âthe genius of Sequoyah.â

Roughly inscribed on the limestone wall, Dr. Tankersley said, were 15 identifiable characters from the syllabary. They are accompanied by a date, apparently carved by the same hand. Part of the date is hard to read, but it appears to be either 1818 or 1808, at least a year earlier than any previously known records of the script.

Dr. Tankersley discovered the cave writing in 2001 and in years of subsequent research established that Sequoyah often visited caves for inspiration while working on the syllabary and made several visits to the region, close to the Tennessee border in what is now Clay County. He had relatives there, the archaeologist said, and could have left the marks there himself.

Dr. Tankersley referred to the discovery in a paper on Cherokee rock art presented last year at a meeting of the Society of American Archaeology. Further details and interpretation were reported in an article in the current issue of Archaeology, the magazine of the Archaeological Institute of America.

If the date proves to be 1808, Dr. Tankersley said, Sequoyah was probably the only one then with knowledge of the writing and so must have carved the characters himself. If it was 1818, he said, it was possible that someone he taught had made the characters.

Specialists in Cherokee writing have yet to analyze the findings. William D. Welge, director of research at the Oklahoma Historical Society, who oversees an extensive archive of Cherokee records, said it âwas reasonable to think that Sequoyah or one of his students carved these writing symbols.â

Any new findings about Sequoyah, Mr. Welge said, are important because his invention of Cherokee writing promoted rapid strides in education and the culture of one of the largest Native American populations. Some crucial early steps in his development of the script had been lost, the archivist said, because Sequoyahâs wife had destroyed examples of his early efforts, thinking this âthe devilâs work.â

Dr. Tankersley was especially intrigued by some petroglyphs carved on the wall alongside the Cherokee characters. He said the glyphs appeared to include ancient Cherokee symbols as well as drawings representing bears, deer and birds.

Dr. Tankersley is a member of the Cherokee Nation who traces his ancestry to Red Bird, the murdered chief once buried in the cave. He said that he was investigating possible links between the traditional glyphs and a few of the symbols in Sequoyahâs script. If a link can be established, he added, the inscription may be âour Rosetta stone, enabling us to see where prehistory meets history.â

Janine Scancarelli, an authority on Cherokee writing formerly at the College of William and Mary, has written, âIn their present form many of the syllabary characters resemble Roman, Cyrillic or Greek letters or Arabic numerals, but there is no apparent relationship between their sounds in other languages and in Cherokee.â

Illegal aliens have always been a problem in the United States. Ask any Native American.

Re: Carvings From Cherokee Scriptâs Dawn 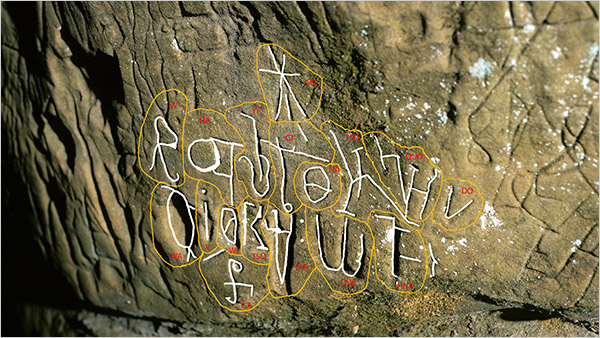 LETTERS Characters in a Kentucky cave that may be the earliest examples of the script.  Fred Coy and Andras Nagy

Re: Carvings From Cherokee Scriptâs Dawn

Beaten to the punch!

This is a great article though!